Talkback Q&A with the cast, moderated by Bethany Van Delt

A One-Act Comedic Play About Food *and Eating 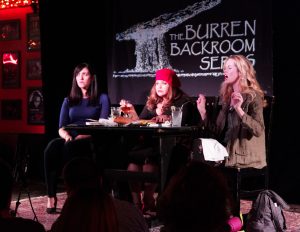 This blog post originally appeared as a blog post for Women In Film and Video, New England https://womeninfilmvideo.org/talking-about-butter-by-kimberly-rose/) 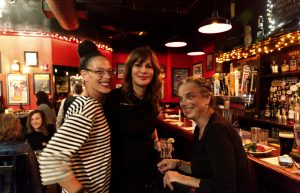 “Food is everything,” said Anthony Bourdain, an endless source of inspiration for a writing foodie like myself.  Food + women is food as love, our role as nurturing chefs & cooks & moms, providers of sustenance…Then there is food as enemy when we have allergies, Crohn’s, or celiac (which I might have); weight issues; the love vs hate of our bodies that eating brings out – self love, eating disorders, fat shaming and more. All these come up in my play, Butter, a play about food (and eating).

During my one-act play, three girlfriends meet for dinner in a restaurant but things quickly get out of control as food cravings and “ultra-sensitivities” clash. One of the women is an uber-organic, weight-obsessed yogi, the other is more passionate and impulsive. The chemistry of this ensemble of amazing actors (Martine Assaf, Eli Escobar, Christina Kostoulakos, Alyson Muzila and Cory Scott as cranky Kyle the Waiter) was palpable on the stage to the Standing Room Only audience at the Burren Backroom in Somerville, on October 16th, 2018.

My main goal for this comedy is, of course, to make people laugh. But I am also fueled by a desire to create roles for complex female protagonists on stage and on screen, featuring actresses that represent the diversity and beauty of real women. It’s very important to me that my stories, cast and crew represent this beautiful, true reality of the world I see around me. For me, this “real reality” includes the diversity of women of all sizes, shapes, skin tones & orientations that I grew up with in Miami and see around me every day. #RealWomen #Realsizes #RealLife The format of the evening was different by design. After our hilarious opening act by the nationally renowned comedian Bethany Van Delft, the play itself is 30 minutes long,  followed by a lively Q&A Talkback with the audience.

During the talkback, we discussed the play and the issues the play brings up around eating and food: fat-shaming, body love, cravings,

denying what we love, eating out with allergies, etc. While the play was meant to be more experiential and emotional, for the talkback we encouraged a more intellectual discussion and exploration of food issues. Based on how many audience members had questions, participated, and contacted me after the talkback and since then, I’d say we have hit on a “hot” theme that we look forward to exploring in many different formats, including possibly at colleges and high schools. I would love to use the play as a medium for discussing the pressures kids of all genders via on social media around not being perfect and not having a perfect Instagrammable (fake) body or face. We could use a 10-minute version of the play or film, or just a video of the play beforehand.

I am currently adapting “Butter” to a sketch comedy and/or short film. Stay tuned and if you’d like to participate, let me know! 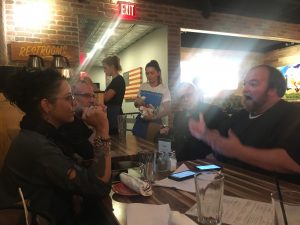 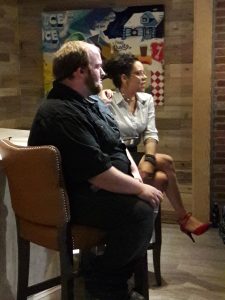 (L to R) Brian Hutchings and Mindy Britto on stage

What if you could organize & manage your Dating Quest like you do a job interview?

What if you applied the efficiency of job interviews to dating? Had several people lined up, like speed dating, but all for you? One at 5:45 one at 6:30pm, etcetera? Next!!! 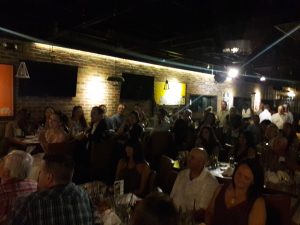 Standing Room Only at Article 24 for Barstool Stories dinner theatre. Bringing theatre to the people

In my play Red Shoes, Gina, a successful Boston techie,  engineers a plan to solve the online dating dilemma… so many men, so little time! Will her plan work? Or it is impossible to engineer a perfect match? Watch what happens in the 10 min one-act play “Red Shoes” to see if it works and who she chooses!

I was inspired by the parable story of the Red Shoes, and the undeniable power of red shoes. 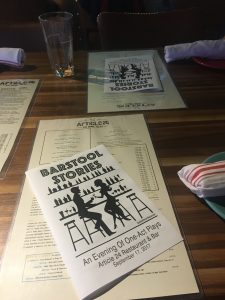 Performed and produced by Play in A Day
April 29, 2017
Natick, Massachusetts 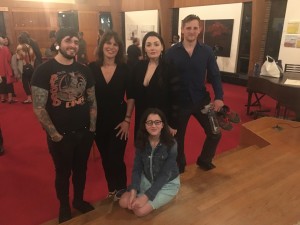